KSU student Camilla Stegall discusses the history of the White Turkey Inn based on F. Meredith Dietz's 1948 book "Let's Talk Turkey." Camilla also shares a few of her favorite recipes from this book.

KENNESAW, Ga. (Dec 10, 2020) — The vision of inns can invoke the feelings of the holidays, especially the iconic Holiday Inn movie itself. However, most of us probably don’t think of “The White Turkey Inn.” I intend to change that.

The White Turkey Inn was established by Charles and Mary Morgan in the early 1900s in Danbury, Connecticut. The Inn was a historic house that was originally built for a newlywed couple in 1760 and remained in constant use as a private home until the Morgans turned it into a restaurant and Inn. When Charles died in the early 1930s, the house was purchased less than a month later by another couple, Harry and Dorothy Davega. The Devegas expanded the White Turkey Inn into a small chain of restaurants. Several more fledgling White Turkeys hatched across New York by the end of the 1940s. And that’s when F. Meredith Dietz enters the story.

Let’s Talk Turkey was published by Dietz Press and, as you may have guessed, it was a family business. F. Meredith Dietz’s father, August Dietz, established the printing company in the early 1900s in Richmond, Virginia. August Dietz was a German immigrant who came to America in the 1870s. He got involved in printing as a young man, following a centuries long family tradition of printing. In 1935, August Dietz’s company changed its name to The Dietz Press.

Now that we know some history of the White Turkey Inn and some background on F. Meredith’s Dietz and The Dietz Press, let’s dive into some of those recipes! It may not be surprising to learn that a great portion of this book is dedicated to turkey. So. Much. Turkey. Tips and tricks include: how to choose the best type of turkey, different ways to roast the turkey, the best ways to carve the turkey (as seen in the diagrams), and several recipes on what to do with leftover turkey. 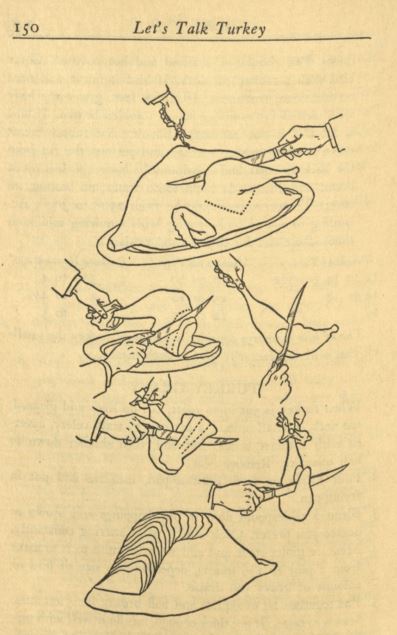 Many of these turkey recipes seem to be the usual suspects for chicken recipes: pot pie, a la King, etc., but with turkey. Here are a few of my favorites: (These amounts are for a 5-pound bird, please double for a turkey weighing 16-18 pounds).

Toasted Almonds: Toast 1 cup almonds in a pan, chop slightly and then replace 1 cup breadcrumbs with the almonds.

Crisped Bacon: Break and mix six strips of bacon throughout your dressing.

Raisin: for a sweeter side, use raisin bread instead of white bread. Also substitute ½ cup raisins for 1 cup of your breadcrumbs.

Now that we have ideas for the turkey and a popular side, let’s have some dessert! The White Turkey Inn’s Pumpkin Pie is sure to please your guests as it appears to have been a favorite at the Danbury Fair (Dietz 1948, 285-286).

For the pumpkin pie filling: 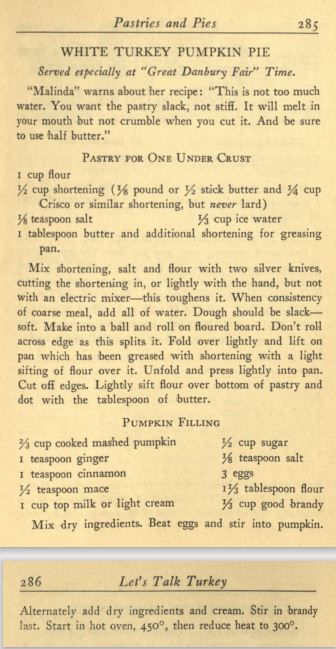 While additional information on the White Turkey Inn is scarce, based on my findings it appears that the original White Turkey Inn in Danbury, Connecticut, was torn down in the early 1970s. Two hundred years of family history, memories, and great food went with it, but thankfully many of those memories and recipes have been preserved by F. Meredith Dietz’s Let’s Talk Turkey.

The Paper Tyger Blog wrote a post on The White Turkey and many of the comments include fond remembrances of the Inn: http://thepapertyger.blogspot.com/2010/02/white-turkey-inn-danbury-ct-part-1.html